Causes of Burn Injuries and How to Get Justice 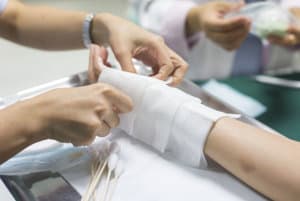 It is one of the most painful experiences of a living being to survive the burn injuries. It can be of any sort- minor or major. Usually, people with minor burn injuries do not pay much heed to it and do not look forward to filing a police complaint as well. While those who undergo the trauma of major burn injuries must look out for justice if they have been put up in such a situation by someone else’s fault. Such physical pockmarks are extremely painful and leave a lasting impact on one’s emotional state of mind.

The minor burn injuries are considered first degree where the survivor can continue to live his or her routine life after a few days’ treatments. The burn that reaches up to a partial thickness that can involve deep dermis layers is called second-degree burn. At the same time, the major and serious burn injuries are the third degree where the survivor almost reaches the edge of succumbing to the burns but revives with treatment. It takes a really great deal for them to live a life which is normal even after recovering from the wounds and pains that takes several weeks to months. However, the causes of negligence in bringing such amount of pain and hurt are brought to justice in the court of law.

The Pittsburgh burn injury attorney will explain to you about several causes, symptoms and their impact on your case. He or she will explain to you the clauses under which the court of law can help you in gaining compensation against what you have lost. Once you will discuss the details of the case as well as an accident with your lawyer he or she will try to find out the reasons of the accident and how the negligence of the guilty has become responsible for your suffering. Your Pittsburgh burns injury attorney will prepare a case in which he will list the ways in which the accident could have been prevented and various safety regulations that could be taken towards being responsible in the given situation. When someone has negligently or knowingly ignored the safety measures, the court holds that person accountable for the mishap to the victim. A well-informed burn injury lawyer will help you in receiving the compensation from the other party as well as bring them to unishment for their irresponsible behavior. Let us discuss here various causes of burns and different situations that lead to it:

Burns due to car accidents:

Although it is believed that car accidents lead to hurt but one must know that car accident also result in serious burn injuries of second to third-degree which can be immensely painful. It happens due to the presence of fuel gas and other inflammable items that make the car run. We must have heard of explosions in the cylinders due to overheating or leakage as well as mention of engine fire eruption due to friction and other possible causes. However, if the negligence of any party such as the car services mechanic or the accident occurs to the driver while the owner knew of the poor condition of the car these all situations are punishable under various circumstances.

Burns due to Chemical exposure:

While you are exposed to any kind of chemicals, there are utter precautions that are taken to ensure the safety of anyone exposed to it. However, if you suffer burns despite, this case has to go under investigation and someone needs to be held accountable for the accident. Chemical burns are caused when acidic and basic chemical compounds are directly brought into contact with the skin. In several cases, these toxic substances bring burn down to the bones as well which is an extremely
traumatic experience. There are cases when such burns are caused by accidents while in some cases chemical burns such as acid attacks are a consequence of the physical and mental assault. The Pittsburgh burn injury attorney will understand your situation and will help in you guiding through the case. You must discuss the details with him or her and learn in what way you can be compensated to bring your life to normal.

Burns due to Electrical shock:

We often get to hear of cases when a strong electric shock or short circuit causes immense hurt to someone. Such circumstances can lead to severe burns to the external body as well as the repercussions lead to heart attacks some times. The uncontrolled and high amount of electric waves are good enough to spruce the heat energy of human body molecules to the extent of causing them severe burn. Usually, when we work in such circumstances where proper measures are not taken to avoid such accidents, it occurs. The Pittsburgh burns injury attorney will suggest you take actions so that such incidents can be avoided for others in the future as well as you can get compensated for the wrong happened to you.

These are some of the major types of burns that are known widely. There are various lawyers who have spent a major part of their lives in practicing on burn cases. They may have brought various clients to justice who had lost the hopes of bringing their lives on track. However no amount of money can compensate for the pain and suffering as well as the set back that one suffers from these burn injuries, the monetary compensation can help you in getting a good treatment and allowing your life to run normally when you are not able to work at the previous pace.

Other than money, in a few circumstances, your Pittsburgh burn injury attorney can help you in bringing justice against physical care and support. For example, if you are not in a position to perform the household duties in a normal fashion, the guilty have to take care of your needs as long as you become healthy. Therefore we recommend our readers to hire only experienced attorneys who know well how to handle the tactics of the opposite party and can ensure on what strong points they can convince the court of law to bring justice to their clients.